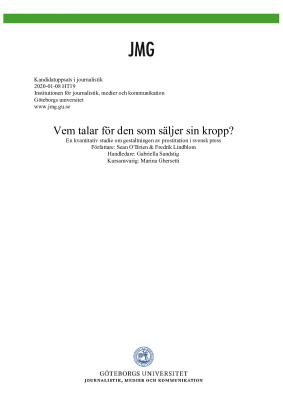 This is a study of how prostitution is portrayed in Swedish mainstream media. More specifically, a quantitative content analysis for the purpose of answering the question of who and what is given the space to define prostitution in four of the biggest newspapers in sweden.

The material that was studied was a total of 198 articles, almost evenly divided from the four newspapers. The main focus was on the 79 articles where our coding determined that prostitution was the main topic. The other 119 articles dealt with the topic of prostitution, but had other topics as their main focus. The period of time from which the articles were published ranged from January 1, 2019, to the end of November of 2019.

The results of the study showed a strong representation of the police and other representatives of the judiciary in swedish press. Furthermore there was a focus on the descriptions of problems that comes with prostitution, and the underlying causes for why it exists.

The results also showed a difference between tabloids and the other newspapers configuration of prostitution. Sexbuyers got more space then the prostitutes themselves. Prostitutes where still represented, but to a small extent.