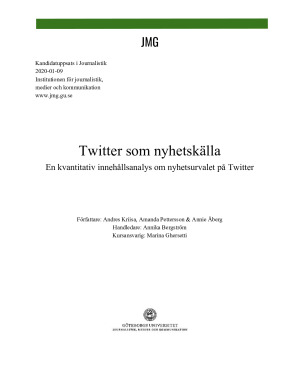 We chose to base this study around two main research theories. The agenda setting theory and the theory of news value. The agenda setting theory is the main argument of ​why ​we made this study. The theory claims that the news we take part of from news media define our worldview. Therefore it’s important to investigate what kind of news that’s the most discussed on Twitter. The theory of news value is coherent since we want to measure what kind of prioritized news that established media and Twitter contains. We’ve used earlier studies about what factors make an event newsworthy. We applied those factors on today’s media climate and created variables based on them. The news stories we coded also got divided into fifteen different categories based on theme. For example politics, sports and culture.