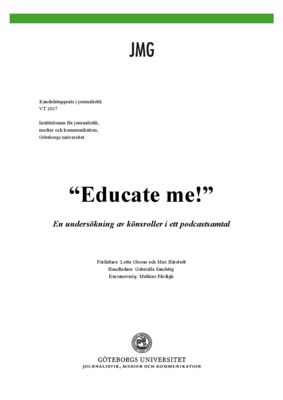 The aim of this study is to make an initial attempt at investigating how conversations between men and women are structured in Swedish podcasts. More specifically, it uses Conversation Analysis to investigate how gender roles are recreated in podcasts as a new media format.
This is done by looking at how the word is distributed in terms of speaking time, share of lines and share of interruptions. It is also done by looking at how men and women approach different conversation topics.
The material used in this case study is a transcript of one episode of well-known Swedish food podcast Eat This! which is hosted by one female and one male. By analysing the transcript both quantitatively and qualitatively, we found that the conversation structure in our case study simultaneously recreated and strayed away from the gender roles found in our selection of literature. In terms of how the two hosts divided the conversational space, there were infinitesimal differences between the female and male host. This deviates from how a mixed-sex conversation is usually organized, in the way that the man commonly takes up
more time and space. However, in regards to how the different hosts approached different conversation topics, gender roles were re-established. The woman took on a more personal, intimate viewpoint when discussing a subject while the man had a more distanced and status-inclined way of addressing different topics. In conclusion, the study shows that while
gender roles are reaffirmed in the podcast format, the medium can serve as a space where new types of conversations and voices are allowed to take place.
Key words: Conversation Analysis, Podcast, Gender, Gender Roles, Conversational
structure, Lifestyle Journalism, Media, Medium.
1