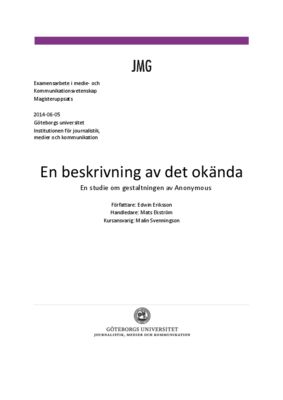 Abstract Purpose and research questions The overall purpose of this paper is to analyse how Anonymous is described and portrayed by Swedish news media, compared to how the active members themselves presents and describe the movement. From this purpose, three research questions were constructed; how is Anonymous being portrayed by Swedish news media? How do individuals who identifies themselves as active members of Anonymous portray it? In what ways do these portrayals differ and correspond respectively? Material Because this paper is a two-piece study, I have collected two separate sets of material. One is made up of 28 newspaper articles from the four biggest daily newspapers in Sweden. The other consists of three interviews conducted with three individuals that identify themselves as active participants of Anonymous. Theory & method I have implemented a qualitative content analysis in combination with the theoretical perspective of Framing order to process and study the material. The media texts are first processed through an overview analysis wherein after four chosen texts are analysed in greater detail. The interviews as a whole are analysed in detail since they are of less extent. Findings The analysis of the media texts showed three main Frames which where dominant in the material. Firstly, Anonymous is portrayed as an impending threat to Sweden’s computerised infrastructure as well as its citizens. Secondly, Anonymous is described as a group or network consisting of a homogenous collection of hackers with one objective in common. The last Frame involves the political and ideological motives of Anonymous being mostly marginalised or ignored. In the interviews, Anonymous is framed as a threat as well, although only to actors who Anonymous view as deserving retribution. They also describe Anonymous as a continuous flow of ideas and an arena which all types of people join to discuss or act against the issue or problem they see as most important, making it a highly heterogeneous gathering of people and ideas rather than an organization or a network. Key words: Anonymous, activism, hacktivism, Framing theory, qualitative content analysis, social movements