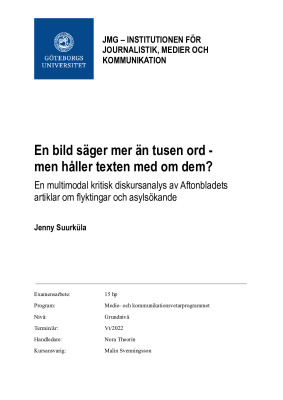 Executive summary
The news media has a large hand in how we perceive the world around us, and one sensitive topic which is widely reported on is refugees and asylum seekers. Therefore, there is and has been a great deal of research made on the subject internationally. With the emergence of the Internet and the digitalisation of the world and thereby also the news sources, it is now easier than ever before to acquire and spread information. For that very reason it is incredibly important to make sure that the news sources are not intentionally or unintentionally sending messages to readers which can potentially be harmful to refugees and asylum seekers. Furthermore, research shows differences in how european and non-european refugees and asylum seekers are portrayed in the media. One way in which such
harmful messages might be sent, is through discrepancies in the messages sent through images and written text in articles. That is, if photographs used in news articles send a different message to the audience than that of the written article itself. The purpose of this study is to find out if such discrepancies in messages between images and written word occur in articles published in the tabloid newspaper Aftonbladet, on the topic of refugees and asylum seekers.

The framing theory discusses how the angle in which something is presented
and reported upon affects the way in which people process the information, and how they feel about the subject. Studies in visual rhetorics and social semiotics among other fields have shown the great power of the image as a medium. It has the innate power to express emotions and complex situations in an instant, whereas a written text, important and powerful as it is, must be read in order for its message to be received. Research has shown that images of refugees and asylum seekers in newspapers often show them as groups of people, without distinguishing features which robs them of their individuality. Often the groups portrayed consist mainly of men and children. There is also often focus on modes of transportation, mainly boats in the photos. These portrayals of refugees and immigrants run the risk of showing
them as a threatening, unidentifiable mass of people, instead of humans in need of help.

Similar effects are also accomplished through the written word. Research has
shown that tabloid newspapers tend to use harsher language than broadsheet newspapers in the reporting on refugees and asylum seekers. A tendency to refer to them as “migrants” is common. This umbrella term risks taking away their need and right to help, and instead portrays them as a faceless mass of people with no claims on assistance. Terms such as “illegal refugee” and its counterpart “legal refugee” cause further harm to the image of refugees and asylum seekers. Research of Swedish newspapers have shown conflicting results on how they are portrayed in Swedish media.

In order to research this phenomenon, this study uses a qualitative method
though multimodal critical discourse analysis, a method which looks at visual and verbal choices made by the text producer. That is, not only is the written text analysed, but also the visual elements, in this case the published photos. In addition, some elements of traditional critical discourse analysis along with questions based on previous research were added to the list of questions asked while analysing the articles.

Aftonbladet was chosen because the wish was to study the articles of a tabloid newspaper, and Aftonbladet is the largest such paper in Sweden. The sample of articles analysed were found through using Retriever provided by the Gothenburg University Library. Articles published between 26 of October 2021 through 26 of April 2022 with the search terms refugee or refugees or asylum seeker or asylum seekers or migrant or migrants in Aftonbladets webb editorial on the subject, finally came to 198 articles. In the end, the final analysed sample came to nine articles. The number of articles analysed was kept undecided until the end, as the quality and depth of each article was seen as more important than the quantity.

The analysis of the photos were conducted before the lexical analysis of the
written text. This was done so that the message of the article would not influence the message interpreted in the image, in order for the analysis to be done from the perspective of the public. The analysis looked at actors and objects shown in the photo, how the actors were portrayed along with what connotations they arouse. Connotations are a semiotic term which refer to an implicit meaning implied by a symbol or a word. These connotations are socially and culturally dependent and the same symbol may carry different connotations in different parts of the world. The lexical analysis of the written texts looked at what themes were presented, which actors were described and how, what actions were being carried out and what words
were used and which could have been used in their place. Afterwards, the results of the analyses were compared. The process was transcribed in order to ensure that all analyses were performed in the same way.

The results of the analyses show that there are indeed discrepancies in
messages sent through images and written texts in articles published by Aftonbladet on the topic of refugees and asylum seekers. Furthermore, there are also differences in these discrepancies between different groups of refugees and asylum seekers, primarily between europeans and non-europeans. The two articles analysed that covered european, ukrainian refugees, showed no discrepancies. The article text presented the refugees as relatable and as people in need of help. They focused on families, women and children. The pictures were photos of the actual people and events presented in the article, and in accordance with the texts they showed the
people as relatable and awoke sympathy. However, the majority of the other articles used archival footage. That is, photos that did not portray the events or people presented in the text, but were rather generic photos loosely related to the subject. The discrepancies found in the five articles that used archival footage, came in the form of either the photo down-playing dramatic events described in the text, or through photos of groups of unidentifiable, faceless people.

One of the articles, on sudanese refugees in Egypt, came with an archival
photo which made them look like criminals being arrested by police. In the article itself, they were presented as victims of racist abuse and wrongful arrest by Egyptian police. Furthermore, the archival photo presented was actually of sudanese refugees “rescued” from a capsized boat by “security personnel”. Another article, which did not use archival photos but pictures of the actual event, described how 600 people, referred to as migrants, had been found in two lorries in Mexico, headed for the US border. The text described them as desperate people; women, children, ill individuals, in need of help. The two photos published showed a large mass of crowded people, and in the other stood a heavily armed, masked police officer wearing a bulletproof vest. The images together give the impression of the people
shown to be a dangerous mass of people in need of surveillance from armed police.

The results thereby show not only that there are discrepancies present in
Aftonbladet’s articles, but that they differ between different groups of refugees. An unexpected finding was that all of the analysed articles, as well as the vast majority of the articles come across during the sample process, were not actually produced by journalists at Aftonbladet, but by Nyhetsbyrån TT. The same articles were found to have been published in several other Swedish newspapers, including Svenska Dagbladet and Göteborgs-Posten. This, along with other factors such as the general shortness of the articles on the topic, indicate that refugees and asylum seekers are not a subject which Aftonbladet prioritises.

The study has laid a foundation for further research, and several possible
research routes are possible. Looking at the possible dangers of people making conclusions from images along with short headlines being shared in social media is a possible future research topic. This alongside looking at discrepancies in messages sent by images together with headlines and article texts. Furthermore, it would be interesting and relevant to interview journalists in order to investigate how they perceive the usage of photos, if they realise the potential dangers of sending unintentional messages through said photos and their general attitudes and methods
when selecting photos.