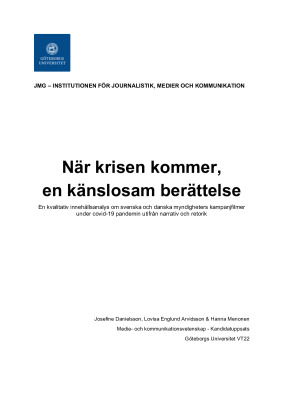 Executive summary
During the covid-19 pandemic, citizens faced many changes in their everyday lives and it was up to the authorities to communicate to the population how that adaptation would work and look like. This essay will examine Sweden and Denmark’s crisis communication strategies based on campaign films from each country’s responsible authorities. In the study, we will delve into the content of eight campaign films, four from each country and examine how narrative and rhetoric have been used.

The purpose of this thesis is to study how narrative and rhetoric are used in Danish and Swedish authorities’ campaign films during the covid-19 pandemic. The use of narrative and rhetoric will also be discussed based on the epidemiological and operational status during the pandemic. The status is defined by the basis of high or low spread of infection as well as stringent or eased restrictions. To achieve the purpose, we will study the use of ethos, pathos and logos, as well as the narrative structure of the campaign films based on a rhetorical and narrative analysis. The narrative structure will be studied according to theories of narrative, more specifically Robertson’s narrative model, which describes the anatomy of a story.

The main results of the study showed that the campaign films in both Sweden and Denmark are similar in terms of their use of narrative and rhetoric. All campaign films contained almost all of the narrative elements presented in Robertson’s model. As regards the rhetorical analysis, we can distinguish an imbalance between the three forms of appeal, ethos, pathos
and logos where pathos was the most common form of appeal. From the rhetorical analysis, the main result showed that positive emotions and eunoia could be found in all campaign films, regardless of the epidemiological and operational status during covid-19 in both Sweden and Denmark. When the countries had stringent restrictions we found that the feeling of hope, direct logos argument and depiction of private locations were used in the campaign films. Furthermore, the results showed that rhetoric was used in a humorous way in calmer periods during the pandemic.