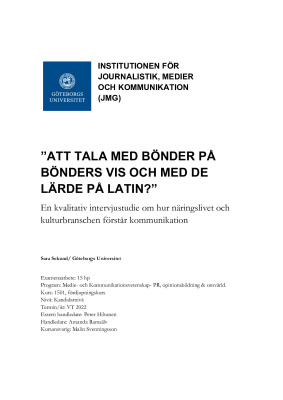 Unlike the business industries, which thrive upon economic purposes, cultural arts industries are often described being artistic and complex. In Sweden, good communication between business and cultural arts has been recognized as necessary for both parties to succeed in society. However, the
relationship is often associated with conflicting interests, lack of knowledge, and difficulties linked to communication and language.

The aim of this thesis was twofold. First, the purpose was to investigate how the cultural- and business industries understand communication. Second, the objective was to analyze the possible consequences of this understanding. The main research question was: How do representatives from the cultural and business industries describe the concept of communication? Furthermore, how can the communicative difficulties between them be understood?

This thesis collaborates with the organization Kulturakademin, a regional resource for competence development in arts, crafts, performing arts, music, and audiovisual media in Västra Götaland, Sweden. The method used was qualitative interviews. Four actors represent the business area, and
five represent the cultural and creative area. Furthermore, the implementation of Pierre Bourdieu’s Social Fields Theory and a Scandinavian Neoinstitutional perspective has served as a framework applied to the empirical analysis.