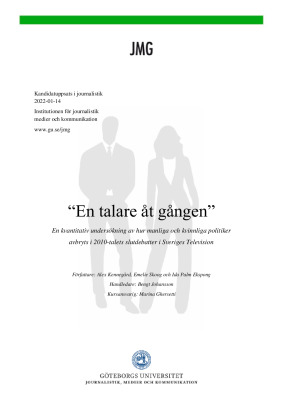 Aim of thesis: The aim of the essay is to investigate whether female and male party leaders are being interrupted equally, during the 2010s final debates in Sveriges Television (SVT). This,
due to Public Service’s requirements of conducting equal programme activities, where interruptions are used as a measurement of equality.

Theoretical framework and methods: The size of the material selection and intention of answering questions about the 2010:s, makes a quantitative analysis suitable for this essay. Data from the three final debates are coded in the statistical analysis platform SPSS. The theoretical framework used is Conversational analysis (CA), which is an approach to study social interactions. The phenomenon of interruptions is only a minor component of CA, but is focused on here since it is the relevant part for this essay. There are numerous definitions of what an interruption is, but the one used in the analysis is based on one of the developers of CA, Sacks’, definition: if A is talking along and B starts to talk in the course of it somewhere, then we might say that B is interrupting A (Sacks, 1992, s. 323). The reason for the usage is the simplicity of his definition, which improves the reliability and replicability and reduces the risk of interpretation.

Results: The result shows that journalists interrupt men and women differently, where men
generally are the disadvantageous ones. Men receive more interruptions and get to speak
shorter time before an interruption is made by a journalist. The opposite is true for women.
This goes against previous research about inequality in the media, where women generally are
the disadvantageous ones. This may be problematic because of the Public Service’s requirements to conduct equal programme activities. The result finds that the journalist’s handling of the politicians’ interruptions of one another is relatively equally conducted.

To see if the interruption rate depends on the gender of the politicians, another aspect is also
studied, namely political coalition. A difference between both gender and different political
coalitions are found here. Meaning that it is not only the gender of the politician that affects
how often and after how long time they get interrupted. However, the difference between the
interruptions of female and male politicians is problematic, concerning the requirements that
SVT have on conducting equal programme activities.