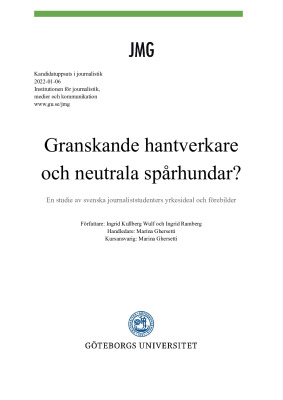 The aim of the thesis is to examine journalism students’ views on journalistic ideals and if
they have any role models. By seeing how students value different journalistic ideals, this thesis aims to examine if the students are a part of a socialization process, how they socialize into the field of journalism. It further examines if students have any role models and what ideals these role models represent. Role models are a part of any work-based identity and someone to look up to. Are these heroes and icons prevailing in an increasingly digitalized media landscape, where almost anyone can be seen or heard?

The thesis uses theories about the socialization process and fields, professionalization and the
importance of role models.

The method used in the thesis is a survey-based examination. A survey consisting of twelve
questions was sent out to 440 students at four universities in Sweden who offer a journalism
education on a Bachelor’s level. 208 of the students completed the survey.

The results show that most of the journalism students agree that the ideals of scrutiny,
objectivity, neutrality, explaining complicated events and allowing different opinions to be
heard are the most important for journalists. The level of disagreement is higher when it
comes to ideals like influencing opinions in society and giving people amusement. These ideals also get lower averages. Students do not seem to become neither more nor less like minded during the course of their education. The differences between the schools are also insignificant. Women and men value some ideals differently, however they largely agree on the most important ideals.

The students’ role models are active within various journalistic fields. The football journalist
Erik Niva received the highest number of mentions, twelve. Many of the role models only received one mention, which indicates that for many students role models are something rather individual.