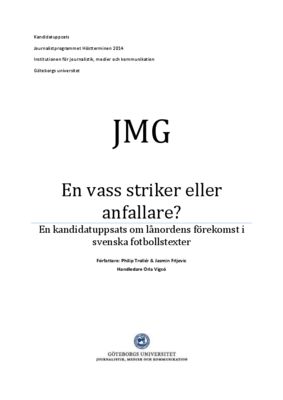 Authors: Philip Trollér & Jasmin Frljevic Title: A sharp striker or forward Level: Bachelor of Journalism Location: University of Gothenburg Language: Swedish Number of pages: 62 All throughout time the Swedish language has been influenced by various external languages. And throughout the years many loanwords have been introduced to the Swedish vocabulary. And this phenomenon occurs in the texts written by Swedish sport journalists. But in what extent do loanwords from the English vocabulary occur in texts written by Swedish sportjournalists, in what types of texts they can be found. And also why the usage of loanwords occur. The purpose of our study is to find out how frequent English loanwords are in Swedish sports journalism. We carried out a quantitative content analysis on two major Swedish newspapers, Dagens Nyheter and Aftonbladet, in their coverage of the World Cup in football the years 2006 and 2014. And also if there is a difference between the Swedish daily press and the Swedish evening papers. We analyzed 495 articles in total, during these two world cups, and found that loanwords appeared in 20 percent of these 495 articles. Where most of these loanwords were found when the World Cup 2006 was analyzed. And primarily in chronicles. We also found that the amount of texts written about the World Cup 2014 was smaller. Our conclusions are that the usage of loanwords is primarily because sports journalists need a broad vocabulary when writing about sports. They are used in order to produce a better text and also create a feeling for their readers. When it comes to the usage of direct quotations from English phrases these might be misinterpreted if they are translated to Swedish, and also lose what the meaning of the usage was. To create a feeling for the readers.