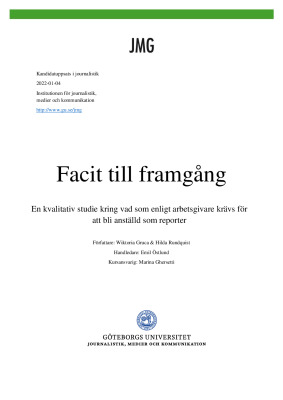 This is a qualitative study that aims to investigate which skills and characteristics that are
crucial for being employed as a reporter at a newsroom in Sweden today, and how an ideal
reporter is described from the perspective of employers. Including topics as education,
experience, and personality as a base for discussion about importance of those for a possible
employment.

The area affected by the study lacks a theoretical basis due to the lack of previous studies on
this topic and therefore the study is based on a theory that also concerns human resources.
Therefor the Signaling theory will be applied on this study, to examine which signals that
help employers to make decisions about who they should hire. Furthermore, the concept of
diversity will examine whether and how it plays a role during the recruitment of new
reporters. Thus, whether employers actively reason about diversity when they recruit, and
what in that case is sought and determine the final employment decision.

The study is based on semi-structured interviews where approximately 20 predetermined
questions under themes as education, personality, experience and others were asked to the
respondents. Follow-up questions were also included depending on the situation for a more
in-depth knowledge of the subject. The interviews were implemented with ten respondents
who are involved in recruitment processes within various media companies in Sweden
including Hallands-Posten, SVT Riksnyheter online, SVT Västerbotten, Aftonbladet, Ekot,
P4 Stockholm, TV4 Nyheter och Samhälle, Göteborgs-Posten and Svenska Dagbladet.

Result shows that it is important for employers that the reporter has a journalism education
but less important with which, has previous experience of an editorial office, experience of
different media, can collaborate and come up with ideas, is driven and likes sharp situations.
As for the most important factors of education, experience and personality, the education
turned out to be the least important and previous experience the most. There should be a
diversity in the editorial office where the candidate who contributes with new perspectives or
something extraordinary becomes more interesting and you should have the desire to develop
personally in your profession as well as together with the company. The description of an
ideal reporter varies but the abilities that are described repeatedly are to be fast, creative,
committed, have a broad experience, be passionate about investigative journalism and have a
unique background.