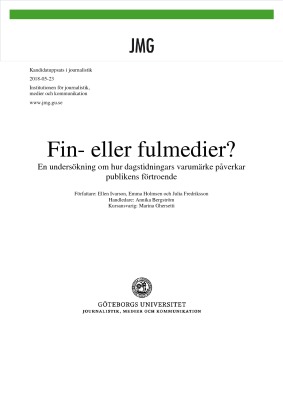 This study explores how the brand of a newspaper affects the perception of credibility for the content in the article. The idea was to compare a morning paper which the audience generally has a bigger trust in with a tabloid paper that is often perceived as less credible. The study includes articles from the morning paper Dagens Nyheter and the tabloid Aftonbladet.

Large parts of the study are based on previous research on media trust made by Maria Elliot and Oscar Westlund. According to their theories, aspects such as use, knowledge and expectations are factors that can affect trust in general and in media. In addition we also thought that the brand should be amongst these factors and added the expression brand credibility. Our intention was to investigate these aspects to try to find out what it is that affects weather an article is perceived as credible or not.

Also when we examined the factors age and gender we discovered that the brands had different impacts. We could see that younger people tend to have a greater trust in the articles from Aftonbladet, whether the brand was visible or not. For the older participants it was the opposite. They perceived the article as less credible when the brand was visible.