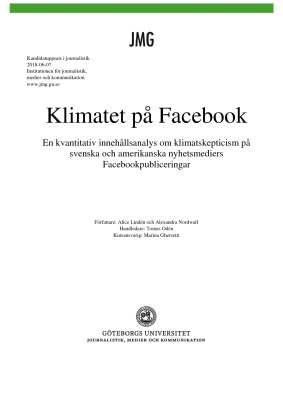 The aim with this study was to investigate two established newspapers from Sweden and USA, more specifically Aftonbladet and USA Today. We wanted to see how these newspapers portray articles about climate change, which of the articles they chose to post on Facebook and their readers’ comments on the posts.

The study’s aim allowed us to analyze the interaction between the two newspapers and their consumers to see whether there exist any specific traits in Aftonbladet’s and USA Today’s way of constructing Facebook publications that result in a polarized discussion in the comment fields. Could the newspaper’s Facebook publications function as an arena to climate sceptics to openly express their opinions?

We worked with a combination of a quantitative content analysis and a qualitative text analysis to get our results. We estimated that this would be the best way to answer our question formulations and hypotheses. Our analyzing objects were articles about climate change published on Aftonbladet and USA Today during 2017 as well as Facebook posts with links to those climate articles and the audiences’ comments on the posts.

Initially our main hypothesis was that USA Today would publish, both on the website and on Facebook, more articles with a sceptic angle compared to Aftonbladet. We also believed that there would be far more skeptical comments in posts from USA Today. The results show that Aftonbladet had more skeptical comments, although USA Today, had a higher percentage of articles with a sceptic angle.

When analyzing the results, we discovered that articles published with a sceptic angel generated acknowledging response in the comment field and vice versa. How the newspapers choose to frame their articles have a vital impact on how the audience perceive the information.

The result of the essay allows us to draw the conclusion that Facebook publications made by newspapers can function as an arena of discussion to climate sceptics. It also shows that newspapers way of framing their Facebook publications create a significant effect on how the reactions and comments will turn out. The audience does not solely comment on the posts, they oppose.