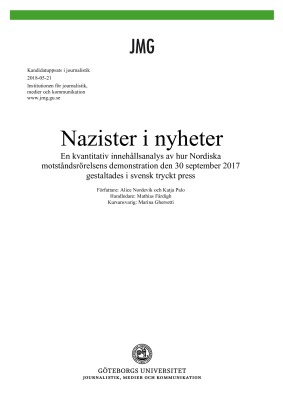 This bachelor thesis is a quantitative content analysis of the Swedish nazi group Nordiska motståndsrörelsen (NMR), their demonstration in Gothenburg on the 30th of September 2017
and the counter demonstrations against it. Using theories of framing we examined whether the demonstrations were framed in an episodic (event- or exemplar-oriented) or thematic (issueoriented) way, and whether it differed between newspapers. In addition to framing, we used theories of newsworthiness and commercialisation to analyse the results.

The way in which an event is being framed in the media influences how the public perceive the issue at hand and how they form opinions about it. Therefore, it is relevant to study how different events are framed and presented. In total we analysed more than 700 articles from 133 different newspapers published during a two week period before, during and after the demonstrations.

The results showed that the overall coverage of the demonstrations was primarily episodic— specifically episodic event-oriented. However, the counter demonstrations had a higher rate of thematic coverage than the NMR demonstration. Regarding the difference between newspapers, we found that tabloid newspapers to a higher extent framed the events as
episodic rather than thematic. Conversely, the daily newspapers had a higher rate of thematic rather than episodic coverage. However, the results showed no difference between local or national daily newspapers.

Our conclusion is that although the coverage of the NMR demonstration had a higher percentage of episodic framing, it is inaccurate to state that it was entirely the responsibility of
the journalists. Due to the refusal of NMR to speak to the media, journalists were required to turn to official sources such as the police instead. This led to the fact that the majority of the articles were written from a police perspective. As thematic framing often depend on demonstrators offering their point of view, coverage of the NMR demonstration was naturally less thematic.