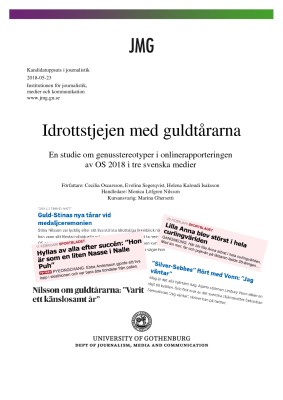 The purpose of this study is to investigate the occurrence of gender stereotypes in the Swedish online news reporting of the 2018 Winter Olympics. The aim is to find out to what extent the Swedish media uses stereotypical attributes and contexts in the portrayal of athletes through a gender perspective. The theoretical frameworks used in this study are mainly the theories of framing and gender. Furthermore, the operationalization of the different attributes, depictions and contexts used in the analysis, are based on previous research in the field.

The findings of the study show that there are no major quantities of gender stereotypes in the Swedish reporting of the Pyeongchang Winter Olympics. However, out of the cases where they do occur, there are certain tendencies worth noting. It is more common for the female athletes to be portrayed with typical female stereotypes, particularly with emotional attributes, than the male athletes. On the contrary, women are attributed typical male stereotypes to the same extent as men. Furthermore, the female athletes are given the typical male attribute of power, in an even higher extent than the male athletes. In a comparison between the three online newspapers, the main difference noted is that Aftonbladet uses female stereotypes much more frequently than Dagens Nyheter and SVT Nyheter.

The results from this study do not strongly correspond with the theories and results of previous studies, which tend to show much larger differences between the sexes. Furthermore, they even break the typical female stereotype of impotence, and therefore go against the tendencies found in previous research. It does, however, correspond with some aspects, regarding the higher frequencies of female stereotypes used for the female athletes.