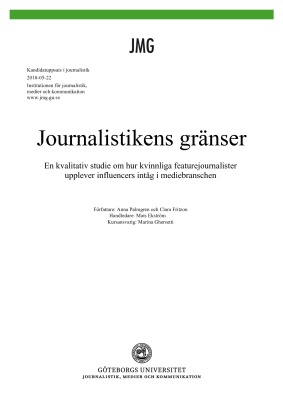 Purpose: The main purpose of this study is to examine what attitude journalists have to influencers and whether journalists witness that there is a border between journalists and influencers. Also how journalists define the most important ideals, what standards they believe exists in their areas and
what ethical decisions journalists take in their daily work.
Method: Qualitative in-depth interviews with seven Swedish journalists working in the magazine industry. The interviews were thereafter transcribed and analyzed with help by theory.
Theoretic context: To help us explain the results of this study we used Jane B. Singers theory of standards for distinguishing professionals from non-professionals, Deuze and Witschges beyond journalism theory and Matt Carlssons theory of metajournalistic discourse.

Results: It was identified that all of the journalists experienced that there is a so called grey area between themselves and influencers where the audience sometimes confuse the two different groups. They also believe that there may be competition among the professions as a consequence of
the fact that they both act within the same areas and produce similar content. The ideals drives the journalists and serves as a guide in their daily work, but also as something they seek to achieve in the longer term. We also found that journalists mainly use ethics to separate themselves from influencers. Ethics is for instance used as help when it comes to what journalists can and cannot do in terms of collaborations with other companies.