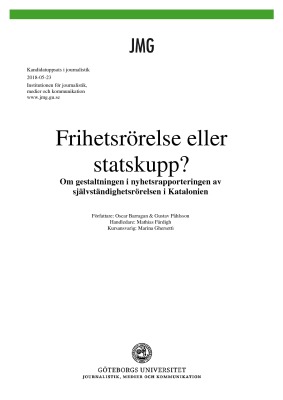 The purpose of this study is to investigate the framing of the independence movement in Catalonia during the fall of 2017 in three large news outlets in Sweden; Aftonbladet, SVT Nyheter and Dagens Nyheter. We investigated the prevalence of six generic frames described in previous research on framing of political events; attribution of responsibility, conflict, human interest, economic consequences, morality and game. We performed a random sample and applied a quantitative content analysis on 60 news stories published online. We also designed an assay to implement a qualitative text analysis based on previous research.