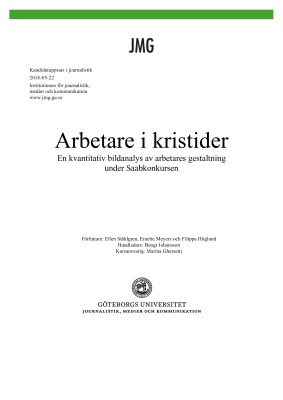 When the automobile company Saab applied for bankruptcy in December 2011 three thousand workers lost their job and income. It was a big disaster for the Swedish town Trollhättan where the unemployment numbers doubled overnight.

The crisis and bankruptcy was big news in Sweden. This study’s purpose is to explore the portrayal of workers in media during this time using quantitative content analysis. A total selection of the images depicting Saab, published in the newspapers TTELA, Göteborgs-Posten and GT during December 2011, have been analyzed. The chosen newspapers all lie in the region of Västra Götaland where Saab is located.

The results showed that a majority of people in the images depicting Saab were elites like the CEO, politicians and trustees, while only 20 percent were workers. Elites were more likely than workers to have their power strengthened by photo perspective and location. They were also shown as being more active through emotions and by being photographed while working.