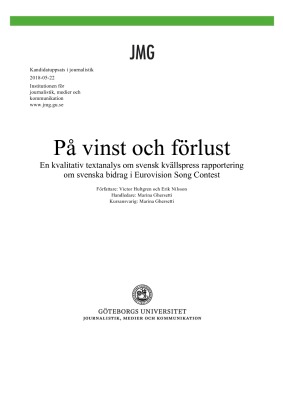 For Swedes it is easy to feel national pride, at least when it comes to Eurovision Song Contest. The Swedish entry has won six times. Only Ireland has a better record. The success seems to interest Sweden since approximately three million of its inhabitants are watching the international music competition every year. With the years, the event has also grown to be a more popular topic in Swedish media coverage, especially
among tabloids. But how does the media report about this and what images are constructed through them?

In this bachelor thesis we examine how the Swedish tabloids, Aftonbladet and Expressen, report about ESC during two separate years. One year when the Swedish participant Loreen won the competition (2012) and another year when Anna Bergendahl failed to qualify to the final (2010). The purpose is to investigate whether frames, descriptions and forms of national identity vary depending on the result of the  competition.

In order to do this we have practiced qualitative comparative text analysis with theories such as framing theory, attribution theory and theories of national identity. By comparing the outer points of failure with success, we discover what is constant and inconstant in Eurovision coverage. In addition, we also compare our research material to previous research conclusions.

The main outcome of this study is that Swedish tabloids concentrate its articles to different themes that most likely relate to the result of competition. During Swedish success, the winning performer is highly acclaimed and the victory is explained by her personal attributes while Swedish failure is explained by external causes in relation to the performer.

Nationalist interpretations are frequently recurring and seem to stay unproblematized. After success the Swedish artist is seen as a national star with the possibility of an international career, which is considered desirable. During the year of defeat, however, the media tries to find identification with Swedish songwriters in other countries’ entries in order to maintain the self-image as a proficient country in music. A Swedish national identity is eminent in which Sweden is a nation of great musical competence – deserving to win and undeserving to lose.