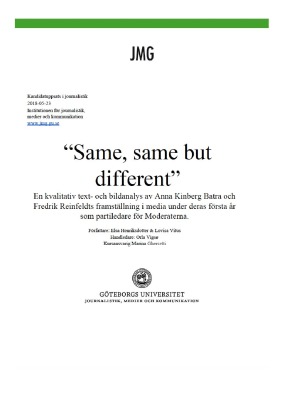 In 2015, something extraordinary happens that has never happened before. The Swedish political party Moderaterna elect a female party leader for the first time in their political history. Anna Kinberg Batra becomes the new party leader who has to take over after the previous party leader Fredrik Reinfeldt. Her mission is to try to steer Moderaterna on the right course after the election loss in Sweden 2014, at the same time as Sweden is experiencing the greatest political crisis in
modern times, as of the December agreement.

Media has the ultimate power when it comes to creating and shaping the image of a party leader. One usually encounters with the party leader for the first time in media and it is by what you see in the media that you base your fact on whether you approve of the party leader or not. Therefore the images that media choose to feed their audience with become the foundations of how citizens perceive various party leaders.

The purpose of this thesis is to compare how Sweden’s four largest newspapers, Dagens Nyheter, Svenska Dagbladet, Expressen and Aftonbladet chose to portray Anna Kinberg Batra and Fredrik Reinfeldt during their first year as the party leader for Moderaterna. This is a unique opportunity to
compare two party leaders who come from similar backgrounds and where the only difference is gender.

To answer our purpose, we have collected a material of 801 analytical units which we analyze in this thesis using a qualitative text and image analysis. By applying our theoretical framework, Body’s semiotics, Visual and Verbal Rhetoric, Framing as well as Gender theory to the analysis, allows us to answer the following questions;

– Are the party leaders presented differently from a semiotic interpretation perspective?

– Is the representation of the respective party leaders sex stereotypical, seen from a gender scientific perspective?

– How does the associated text affect the experience of the image and vice versa?

– Does the presentation differ depending on the newspaper’s political affiliation?

– What different interpretations of the political leaders during their first year, opens for theoretical discussion?

The results show that there is a difference in the portrayal of Anna Kinberg Batra and Fredrik Reinfeldt. However, the difference in the representation based on gender is not as big as we first believed, which brings us to the conclusion that gender and sex are not decisive in the preparation of the two party leaders.

What we can say is that it differs in how the newspapers have chosen to portray Anna Kinberg Batra and Fredrik Reinfeldt from a body semiotic interpretation perspective. Set to inclination and emotional mode, Fredrik Reinfeldt is somewhat more positive than Anna Kinberg Batra, who is primarily portrayed neutrally. We can also see that image and text affect each other and can also therefore theoretically affect the reader.

The political designation of the newspapers may in some cases be part of the portrayal of the party leaders. Evening papers tend to frame them both slightly more negatively than the morning papers. The distance in the picture is also a part of the portrayal, as we were able to interpret that Fredrik Reinfeldt is more often portrayed in a personal distance compared to Anna Kinberg Batra. In conclusion we can establish that the overall impression of image and text in a larger range is positive for Fredrik Reinfeldt than for Anna Kinberg Batra.