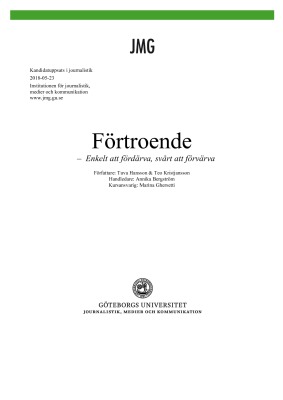 Purpose: The main purpose of this study is to examine how the individuals, who is a part of our focus groups, themselves experience their own trust or not trust for media in order to illustrate how it looks for these individuals. This is because we won’t be able to draw a general conclusion.

Method: Qualitative in-depth interviews with five focus groups with four to six members in each group.

Procedure: We put together five focus groups representing the age range which we are focusing on. Thereafter the groups participated in semi structured discussion under our monitoring led by themes regarding their media trust. After that we transcribed and analyzed the material based on
“Intergrative model of organizational trust” by Roger Mayers, James Davis and David Schoormans theory about how to build trust and “Det viktiga institutionsförtroendet” by Sören Holmberg and Lennart Weibull.

Results: How the respondents themselves look at their trust, or lack of it, to the media. How they, in many cases, feel utilized in relation to the media that, in their opinion, only chase clicks on their onlinepages and to sell.
The respondents trust varies depending on content, platform and company. This depends on factors such as the time of the relationship to the media, the reputation of the company in question and if they advertise a lot or not. All respondent sees a connection between the digitalizacion, the hard competition between the companies and their lack of trust for them. They also state that the major source-critical focus they had under their education plays a big role in their attitude.