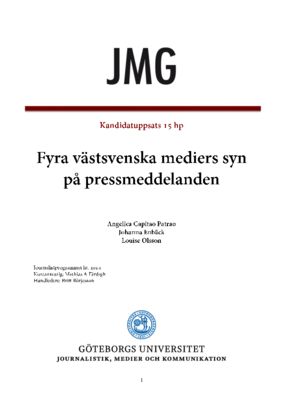 Today most people are in agreement that the media industry is in crisis. Many newsrooms cut down on staff. At the same time the PR industry is growing. We wanted to research if this could affect the unbiased and independent news in our news media today. Today’s newsrooms receive a lot of press releases every day. How many of these reach the published news? Our main purpose was to study the origin of the news published in four different media. To study how many of the news that came from press releases and learn the opinion about press releases of each news editor, and if they treat different senders in different ways. We examined four different media: one daily newspaper, one tabloid, one local radio sta-tion and one regional television newscast. This we did by examine two days of their news. To find out the source in a reliable way we called the people appearing in the article and not just the reporter. We also interviewed the news editor of each media. Our results show that our theory on cutting down staff would affect the use of press releas-es did not correlate with the reality. According to our study the news editors and news-rooms are mostly positive towards press releases. They use them as any other tip or source. However they all agree that, since they get so many, it takes a lot of their time to sort them all out. Although all editors also agree that they don’t rely on getting news from press re-leases, the result shows otherwise. Press releases seem to be a daily part of the newsrooms, at least the two days we examined. Our result also shows that there is a difference in usage of press releases between the different media organizations, and the press releases that are mostly used come from authorities and not from profit-driven companies. Our study excludes sports and culture, because we wanted to focus on the most unbiased part of the news. If these had not been excluded the result would probably have been very different.