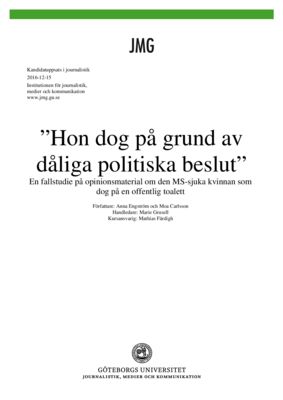 This study examines the news report of a case with a woman with multiple sclerosis who died in a public bathroom at a shopping mall in Malmö, in October 2016. We also study the way she and her death is used in articles and texts of opinion and the arguments used in the debate. To succeed with this, we used 108 articles written about the woman and the case
and categorized these to make sense of and overview the material. Out of the 108 articles, were 36 opinion texts. We strategically chose six of these to do a qualitative content analysis to study how the woman and her death was used and described.
We have chosen this subject because we both had an interest in the way people with disabilities are represented and described in media. But also since this case, in present time, is well known and in question, both as a current case and as an example of a victim in the cutbacks in the assistant allowance and LSS (the law of support and service to some disabled
people).
Our results show that the news report changes over time and that the majority of the news is published during the first three days, after that the amount of news articles stagnates and the number of opinion texts increases. The qualitative content analysis shows that the woman is
foremost an example in the debate about the cutbacks in the assistant allowance, and that she is portrayed as a victim. It also shows that she is not principally described as a person with a disability but a person in need of assistance. We see big differences between the six opinion articles in the way she is described and used as an argument.
We also discuss how it’s a case of victim journalism.
Keywords: disability, news, multiple sclerosis, representation, opinion, role, roll,
funktionsvariation, MS, multipel skleros, funktionshindrade, nyheter, media, LSS, assistans, debattartiklar, krönika, ledare, insändare