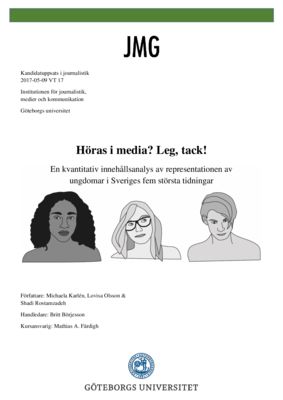 This study is a media analysis of the representation of adolescents in Swedish news media, undertaken during the spring 2017.
Theories about diversity and representation state that the media should reflect different groups of the society. As one of these groups young people have a right to be represented in the media. However, the idea is complex since they are at the same time considered a group that needs protection from harmful portraying.
The aim of this study is to examine the coverage of adolescents in the news content of the five largest newspapers in Sweden: Dagens Nyheter, Aftonbladet, Svenska Dagbladet, Expressen and Göteborgs-Posten. The study aims to find out how often underage teenagers (13-17 years) occur, in what context and how the image of adolescents is constructed in the material. This study was carried out using a quantitative content analysis and consisted of 1789 articles. These were published in the newspapers news content during 14 randomized days during the period January 31-April 2. To guide the study and analyze its results theories mainly about diversity, representation and news value have been used.
The results show that underage teenagers occur in 62 articles or 3.5 % of the material, while the group constitutes about 5.5 % of Sweden’s population. When they do occur they are rarely quoted or pictured. Out of the 62 articles where an adolescent occur they speak in 15 and appear in photos in 12 – making them fairly quiet and invisible. Of the entire material where we can expect at least one person being quoted underage teenagers are being quoted in 1.5 %. Looking at the context where adolescents are being portrayed, 64.5 % or 40 of 62 articles are news about crime and violence. Comparing to the entire material where crime and violence constitutes 25.5 % of the articles one can conclude that the group is overrepresented in the crime category. Most of the adolescents portrayed are either perpetrators or victims of crimes. The majority is men. The results show that the diversity of the group is lacking; the individuals are rarely attributed another sex than male or female, and there is little or no diversity when it comes to sexuality, religion or disability. The idea of diversity however is in direct conflict with the idea of the ethics of the press. Those guidelines suggest that these attributes should not be emphasized at all if it has no significance to the news story.
Key words: adolescence, teenagers, representation, diversity
Nyckelord: ungdom, tonåringar, representation, mångfald