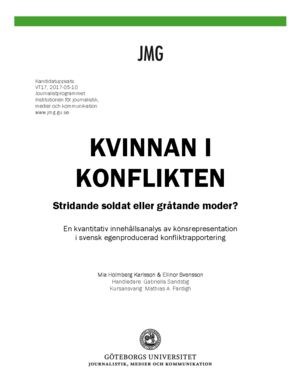 The purpose of this study is to acquire knowledge of how much and in what way women, compared to men, are portrayed in Swedish self-produced conflict reporting. The aim is to investigate the quantitative representation of the sexes and to conclude to what extent men and women get to play
leading, subordinated or minor parts, and to what extent they get portrayed with stereotypical masculine and feminine attributes. This has been achieved by performing a quantitative content analysis on 334 articles and segments from Swedish press, radio and TV during the years 2011 to 2016. The dates were chosen by a simple random sample in order to form six weeks, seven days each per year since the Arab spring broke out in 2011. This specific period of time allowed us to get results that are representative of the global situation of today.
The study has been performed with a gender perspective. The questions asked to our empirical material, and the operationalization of the masculine and feminine attributes, have been formed on the basis of theories established mainly by gender researchers Cynthia Enloe, Monica Löfgren
Nilsson and Liesbet van Zoonen. This theoretical framework has allowed us to understand and analyze whether and to which extent the active, passive, hard and soft attributes are given to men or women in Swedish conflict reporting.
The findings of the study show that women in general are represented to a much less extent than men in Swedish conflict reporting. Men represent the absolute majority in all contexts investigated.
Only two out of ten people in the study’s empirical material were women. Looking exclusively at visual content, women are represented slightly more but the gender balance remains approximately the same. The study also concluded that women are scarce in expert roles and leading parts.
The results of the study confirm earlier research on conflict reporting both in Sweden and other countries, by showing that women are in the minority, are portrayed as victims and often only are present as a male appendage. Men appear more often in the empirical material with military focus,
and women more often with civilian focus. These analyzed results follow the established patterns of the study’s theoretical framework. Men are in the absolute majority regarding active roles and hard attributes, and women are, compared to men, more frequently portrayed in passive roles with
soft attributes.
Key words
Conflict reporting, women in conflict reporting, news subjects, gender, gender roles, masculine
and feminine attributes, gender representation, quantitative content analysis
Nyckelord
Konfliktrapportering, kvinnor i konfliktrapportering, nyhetssubjekt, genus, könsroller, maskulina
och feminina attribut, könsrepresentation, kvantitativ innehållsanalys