Challenges of press freedom and female journalists
in mainland Tanzania 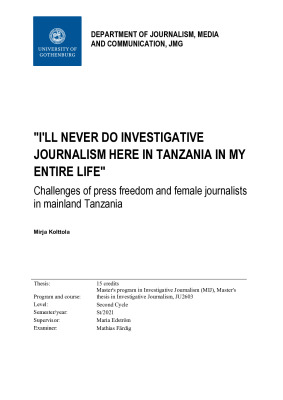 Purpose: The aim of the study is to reflect the perceived professional identities of
female journalists in relation to investigative journalism and how much the
legislative restrictions by the state change their perceived possibilities to
produce journalism according to their ideals.
Theory: Findings are discussed with the theory of social capital by Pierre Bourdieu. In
The Forms of Capital (1986), Bourdieu introduces the accumulation of
different forms of capital, such as social and cultural capital.
Method: The study in hand is based on empirical research and its chosen approach is the
concept of social capital by Pierre Bourdieu. Empirical research has been
conducted by document collecting, interviewing, and participant observation.
The data consists of six semi-structured interviews of educated female
journalists. On top of empirical data, publications by the Media Council of
Tanzania were collected and analyzed: Press freedom violations register
(2016), Compendium of analyzes of media related laws in Tanzania (2020),
Challenging the Glass ceiling: Study of Women in the Newsroom in Tanzania
(2019), and Gender in Media Policy (2019). The conclusions are based on both
the interviews and the document analysis.
Result: Women produce and report investigative journalism in Tanzania, and
journalists of female gender consider working with it to be possible with their
level of competence, but there is a strong sense of self-censorship among the
professionals because of the legislation created to hinder journalism.
Journalists need to work in favor of the government, or they risk being banned,
fined, or imprisoned. The situation above refers to all genders, but female
journalists must hold their professionalism to a higher standard to protect
themselves from inappropriate demands within and outside newsrooms.