Political Parallelism and Role of the State in Armenia, Belarus and Russia 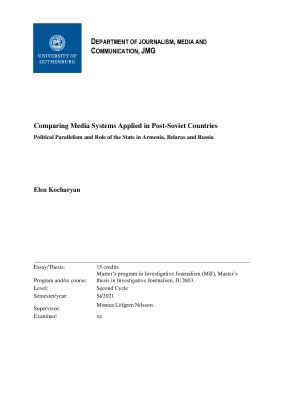 Purpose:
The research aims to reveal the media models operating in the selected three post-Soviet countries: Armenia, Belarus, Russia. As the latters have a joint history the thesis seeks to find out the historica, economic and socio-political casual links that have contributed to the development of the current media systems.
Theory:
The thesis is based on the theoretical framework of Hallin and Manici described in “Comparing Media Systems.” More specifically, to identify the media model(s) and to discover the character of the media-state relationship two of the dimensions proposed by Hallin and Mancini will be further used with a greater emphasis, which are political parallelism and role of the state. Nevertheless, as the dimensions have been designed to be implemented in Western countries, the research also relies on the critiques on the book.
Method:
The analysis is based on both secondary research and qualitative study conducted within the scope of this particular research. The theory has been designed to be implemented on already existing information. To fill in the gaps in the research, interviews have been carried out with 5 investigative journalists from the selected countries altogether.
Result:
The analysis has revealed that three of the selected countries share one type of media system. Nevertheless, the media model differs from those proposed by Hallin and Mancini due to historical, economic, socio-political characteristics of the countries.