I’m gonna make him a review he can’t refuse 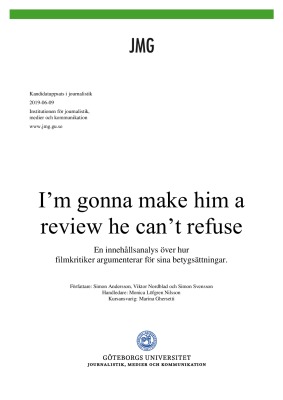 We consider ourselves to be movie enthusiasts and both watch and read a lot of cinema. And since we share this interest in the motion pictures we spend a lot of time evaluating films we’ve seen and discussing films we’re about to see. And since time is the most precious aspect of life, if we decide to spend two hours in a movie theater we want it to be worthwhile. With this in mind we always take guidance from the people who supposedly would be the most eligible to tell us whether or not we should go see the film in question: The critics.

Even though film criticism is a subjective kind of journalism, we believe that there would have to be some sort of basic foundation on which the critics rely. That some aspects of the art form of the motion pictures always would be taken into accountability regardless of the critic and regardless of the paper for which he or she writes.

The purpose we had approaching this study was to determine how film critics write their reviews and what arguments they use when trying to convince the reader of agreeing with his or her opinion. We wanted to study how the critics discuss the films’ value and content, how they use rhetorical devices and how they differ. This we did by analyzing a total of 96 reviews divided on three Swedish media houses. We’ve established our study on the basis of the theory of doxa, the rhetorical tools ethos, pathos and logos, as well as genre theory and theory of content value.

Our main results include that the critics don’t actually differ that much in which arguments they use and how they compose their reviews. The rhetorical tool ethos – convincing by establishing a sense of affinity with the reader – was used in a vast majority of the reviews and there are strong similarities in which aspects of filmmaking they choose to discuss.