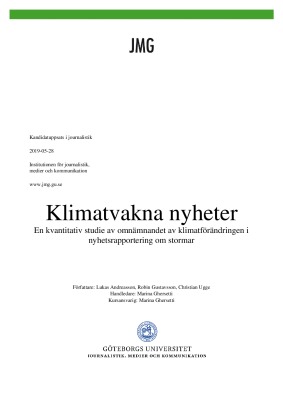 By doing a quantitative study of articles from Sweden’s four largest newspapers (Dagens Nyheter, Svenska Dagbladet, Expressen and Aftonbladet) we want to see how frequently the printed press, as part of their purpose is to inform and educate the population, mentions climate change as a causal factor when reporting on natural disasters.

For the purpose of this study, we chose the disaster categories storms and tropical cyclones as we believe this gives us a wide selection of articles that cover disasters both domestically and internationally. We also wanted to see the development over time. Therefore this study covers a time period of 20 years, between 1 May 1999 and 1 May 2019. In total, our study is based on 894 news articles about storms and tropical cyclones.

The study is done from the basis of a number of theories in the journalistics research field, such as framing, gate-keeping and agenda setting theory, to name a few.