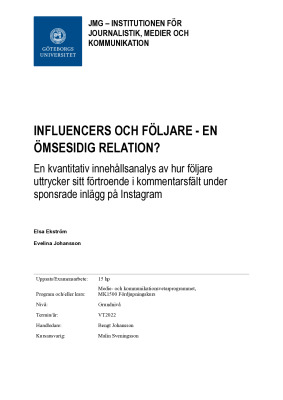 Executive summary
Social media is now part of our everyday life. Most people are either on Facebook, Instagram, Twitter, YouTube etc – or all of them. These social platforms have developed over time and concepts such as influencers and influencer marketing have occurred. An influencer is a person who uses their profile on social media to reach out to a high amount of followers.
Followers of an influencer are mostly people who share their interests and values, and nonetheless people who find them inspirational. Companies have found that influencers are powerful people who can influence a large audience in an effective way, which they now use in their marketing strategies. In that way influencer marketing has occurred. Influencer
marketing is when companies pay influencers to market their product or services. Influencers post about the company and their products on their account and the advertisement reaches the influencers’ followers. Influencer marketing has lately turned into a controversial subject, and people tend to be critical about the fact that it leads to too much advertisement on social
media. Likewise people think that the high amount of advertisement has an effect on influencers’ followers and their view of the influencer.

Studies show that followers experience a certain bond with influencers, and that they value their relationship as a friend relationship. Therefore followers have trust for influencers, just as they have trust for friends. But would a real friend advertise products to their friends and get paid to do so? Is influencer marketing affecting followers’ trust for influencers? The main purpose of this thesis is to examine how followers’ trust for an influencer is expressed in the
comments on a sponsored post from influencers on Instagram. Therefore the main focus lies on the followers’ perspective. This is examined through a quantitative content analysis where eight different influencers and their sponsored posts with comments serve as a basis, resulting in 401 comments in total which are encoded through 17 different variables.

There are four core issues that the thesis is focusing on. The first issue seeks to examine what
attitudes that are expressed in the comments on a sponsored post from an influencer on
Instagram. Second issue seeks to examine what similarities and differences there are in the
comments depending on which influencers’ post is examined. The third issue seeks to
examine how often influencers and their followers interact in the comments. The fourth and
last issue seeks to develop an understanding of how trust is expressed in the comments on a
sponsored post from influencers on Instagram. All of these issues are answered with empirical
results that are analyzed through previous studies, trust as a concept, the two step flow of
communication and the theory (trans) parasocial interaction/relation.

The result shows that the majority of the comments are expressing a positive attitude, mostly for the influencer and the post in its entirety. Expressing a positive attitude can be equated with expressing trust, therefore the result also shows that the level of trust is high throughout the comments. This shows that even though influencer marketing tends to be a controversial
subject, as mentioned in the beginning, it does not reflect in the comments on a sponsored post. There is little interaction from influencers in the comments, this is regardless of influencer. Though interaction builds relationships which in turn builds trust it does not seem to have a great impact on followers’ trust for the influencer. This is because, as mentioned
earlier, the majority of comments are positive. This also means that there are few differences in the comments between all the influencers, because the majority of comments are positive and there are few that express criticism. Most of the comments are directed toward the influencer or toward the post in its entirety, and very little toward the products that are advertised or the company that is in sponsorship with the influencer. This means that it is not
possible to comment on influencer marketing’s effectiveness, though there seems to be very little criticism of influencers making sponsored posts. With that in mind sponsored posts from influencers on Instagram seems to have very little, nearly non-existent, effect on followers’ trust for influencers. Lastly, it’s important to keep in mind that this is a result based on eight
different sponsored posts with the same company brand, there might be other results if therewere other influencers and companies that were examined.