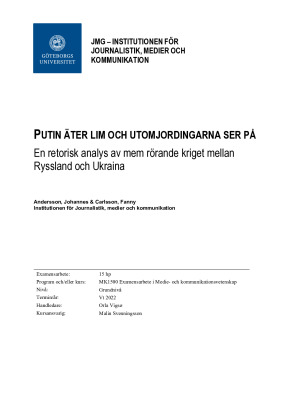 Executive summary
The morning of February the 24th 2022, the world woke up to the news that Russia had invaded its neighboring country Ukraine. After eight years of low-intensity fighting in the Crimean peninsula, Russia conducted a full-scale invasion. The world quickly responded with criticism, condemnation,
and harsh sanctions against Russia. In traditional media, the debate is conducted by politicians, experts and opinion leaders in more traditional ways. On internet forums, however, the topics and content seem more unconventional. On Reddit, memes about Ukrainian soldiers telling a Russian warship to f*** themselves quickly became popular, and previously unknown Ukrainian farmers became viralinternet sensations after seemingly stealing tanks from the invading army with their tractors.

This thesis is about internet memes concerning the war, and the immediate effects of the war, using quantitative thematic analysis and qualitative rhetoric analysis to determine which subjects are the most common to post memes about, and how these are presented. The combination of methods gives a perspective on which factors contribute to the popularity of a meme.

The selection is based on the most popular memes during the initial month of the war (the 24th of February 2022 to the 24th of march 2022). The material is sourced from the subreddit r/memes on the internet forum Reddit, with over 18 million members. Our findings suggest that the material consists of 25 different themes with memes that (1) ridicule the Russian economy, (2) ridicule Vladimir Putin, (3) celebrate Ukrainians, and (4) concern the world situation in general. Only one of the 127 memes included in the material portrays Russia positively. Using the theoretical framework of rhetorics, semiotics, intertextuality and incongruence – with a perspective on humor and traditional satire, we have found patterns in the material. Our findings suggest that memes that ridicule the Russian economy and Putin are personally targeted showing negative things about them to make a point,
whereas memes that celebrate Ukrainians put them in an opposite relationship to create a hero/villain relationship. Regarding the theme of the world situation in general, the content is generally not aimed at a specific person or object, or takes a political stance.

With this in mind we conclude that the rhetorical function of memes in a crisis is (a) an epideictic form of rhetoric expression, that binds together people who agree on a topic, and (b) a way to process stressful and negative emotions. This connects to the basic functions of traditional satire; to criticize
and entertain, and bring humorous perspectives to political topics. What the popular memes have in common is that they are largely based on intertextuality and incongruence and that the enthymeme is
the most common rhetorical trope.

Memes, which are complex multimodal texts, consist of several layers of meaning-making and can be understood on several levels. We suggest that the rhetorical power of a meme lies in the relationship between the producer and the consumer, and how they make sense together. The rhetorical power is amplified by the reader sharing cultural, political and historical knowledge with the producer; which determines how many layers of intertextuality the consumer can detect. These are factors that possibly
also determine the popularity of a meme. We further suggest that future research should focus on comparing how images portrayed in traditional media relates to images portrayed in memes, and qualitative interview studies to determine people’s attitude towards memes.