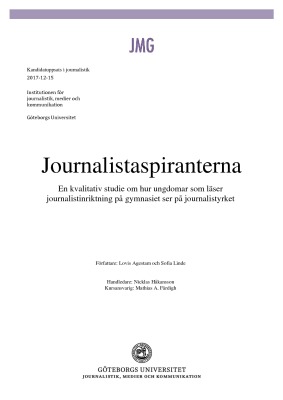 Abstract
The purpose of this study is to examine the underlying causes of whether young students (age 17-19) who study the program with a journalistic focus at a gymnasium level of education will or will not continue on with a journalistic career. These causes will explain the reasons and doubts that our interviewees hold, which will further indicate the ideas and preconceptions of active journalists that constitute the journalistic business field. This information is valuable for the purpose of trying to examine why Swedish professional journalists are proven to be a homogenous group.
A large amount of quantitative research shows that Swedish professional journalists are similar to each other in a remarkable number of categories. They tend to geographically situate themselves in the same areas, hold the same political views, share similar interests in leisure activities and they come from backgrounds of academic capital, culture and financial stability. Research has also found homogeneity among journalism students at Swedish Universities and Community Colleges. In order to contribute to this research we wished to establish if there are similar traits of homogeneity among students at a gymnasium level of education who have chosen a journalistic orientation in their study.
We created a semi-structured interview scheme through which we asked questions regarding the interviewees’ social background, free time activities, aspirations for the future, perception of journalists and the specific industry etc. The interviews were done in focus groups with three students in each group.
To aid in understanding the results we obtained from the interviews, we used sociologist Pierre Bourdieu’s theories on habitus, cultural capital, social age and conflicts between generations at the modern labor market. These theories were used to analyze why some students choose not to follow their original plan to become a journalist, what social traits seemed to be crucial in order to maintain belief in the possibility of entering the field and, surprisingly, why the profession was designated as outdated by the majority of the study’s participants.
What we can present from our research indicates a large variation of aspects that may add to the explanation as to why some social groups in society are absent from the journalism profession. Our research indicates trends and indicative results but not any generalizable conclusions. We can thus variegate the idea of the profession being exclusionary as our results show a limited interest in becoming a journalist. Modern titles that include a heavy emphasis on social media, such as PR-consultant or communicator, attract more attention than the more traditional role of a journalist.
Key words: homogeneity, habitus, cultural capital, professional identity, adolescence, gymnasium, representation
Nyckelord: homogenitet, habitus, kulturellt kapital, yrkesidentitet, ungdom, gymnasium, representation