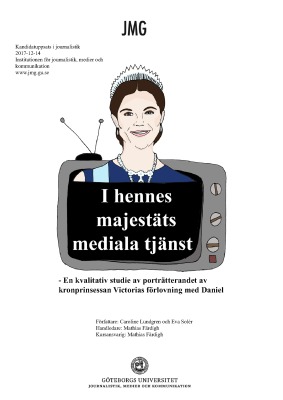 Abstract
When crown princess Victoria of Sweden becomes queen, she will be the first to do so in accordance to the new (well it was implemented in the 1980’s) order of gender neutral succession. The royal family is under constant watch from the media, and especially so the regent. Newspapers, magazines, websites and tv-shows are all producers of material related to the royal family, which ranges from formal inaugurations to weddings and loose gossip. In the midst of all this is a public relations department within the royal court which serves to make sure that the royal family is correctly represented. This causes for an interesting dynamic in which information, and foremost, images of the members are shared to the world through both media and the royal court.
The information that is shared of the royal family has the potential to recreate and spread stereotypical gender roles as the institution of the court is one connected to tradition and history of patriarchy. This study focuses on the portrayal of royal women in media based on crown princess Victoria’s 2009 engagement to Daniel Westling. By analyzing two videos from the engagement: one produced by the royal court and one produced by news bureau TT, we attempt to discover how Victoria is portrayed in regards to her role as a future regent and that of a daughter and wife.
Our study finds that Victoria is portrayed as inferior to the participating men in the announcements, mostly to her father, the king, but also to her new husband, foremost due to shorter speaking time, and the order in which she speaks. We can also see that while the news bureau is more actively sending out a misrepresentation of gender to the public, the royal court are the ones creating the majority of the stereotypes and images by how they are
orchestrating the engagement.
Keywords: Monarchy, Women, Gender roles, Crown princess Victoria, Daniel Westling, Marriage, Engagement.