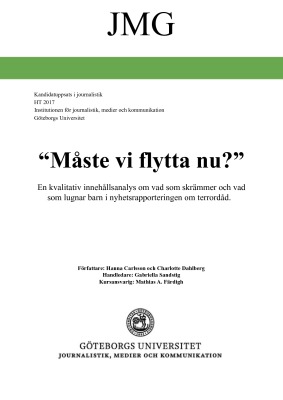 Abstract
Title: “Do we need to move now?” A qualitative content analysis of what
frightens and what calms children in the news report on terrorist attacks.
Author: Hanna Carlsson and Charlotte Dahlberg
Subject: Undergraduate research paper in Journalism studies, Dept. Of
Journalism, media and communication (JMG) Gothenburg University
Term: Autumn 2017
Supervisor: Gabriella Sandstig
Number of pages: 58
Purpose: The purpose of the study is to find out what frightens and calms
children when it comes to reporting on terrorist attacks.
Method: Qualitative analysis
Material: Transmissions from Lilla Aktuellt, Lilla Aktuellt Skola and Nyheter i
Barnradion. Also an article and a chronicle from Kamratposten.
Main Results: How news about terrorism is presented is important. When a terrorist act occurs geographically or culturally close to Sweden, the surveillance is often intensive and the focus is to quickly get information. In our work we have chosen to focus on reporting on terrorism attacks, as something that has come closer to Sweden in recent years and as late
as in spring in Stockholm when five people, one who was a child, died. We have chosen to specifically look at how terrorist attacks are reported for children. The purpose is to look at what in news reporting on terrorist acts made for children what scares and what creates security. We have focused on two terrorist attacks. The terror attack in Stockholm, April 7,
2017 and the Terror council in Paris between 13-14 November 2015. We chose to review Lilla Aktuellt (TV), Nyheter i Barnradion (Radio) and Kamratposten (Newspaper) to find material from the various media.
In order to operationalize our purpose, we asked four research questions: How is the event described? How are terror and terrorism described? How is identification and cultural community created through the news report on terrorist councils? Who and what sources can be heard – and in what way?
Lilla Aktuellt and Nyheter i Barnradion published about the same amount of scary and calming materials. However, Lilla Aktuellt was better at making follow-ups and calming at a later stage. The Kamratposten, which published one material during each terrorist council, could not therefore be compared to the other media. Through a qualitative analysis we found that the first broadcasts were always the most scary. Much information would be conveyed, but they did not take much time to explain concepts and create security. The broadcasts that followed then focused more on explaining, giving the feeling that everything would soon return to normal and that we would get stronger from this.
What both created the most fear and security was through identification with the children who spoke in the various media. Feeling the children worried was often a sense of fear while the children who were calm conveyed a feeling of security.
Keywords: Terror, Fear, Child, Security, Calm, Lilla Aktuellt, Nyheter i Barnradion, Kamratposten