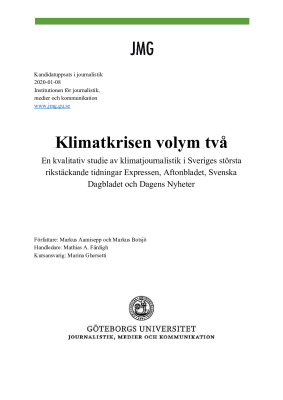 The next year to show a clear peak in the amount of climate journalism being produced in Sweden was 2018. The purpose of our study was to examine if and in what way the medial content during these two years changed. We examined how the problem was presented, which actors appeared in our analysis units and how they were depicted.

The theories taken into account were media logic and framing theory and the method of choice to compare similarities and differences in climate journalism during the years 2007 and 2018 was critical discourse analysis (CDA). Twelve articles from the four biggest newspapers in Sweden were analysed, six articles from 2007 and six from 2018. The results of the study showed that the two years differed in how the “climate crisis” was presented. In 2007 it was depicted as a future problem in 2007, whereas it was as an ongoing crisis in 2018. The results also showed similarities between the years where solutions to the climate crisis are rarely mentioned or explored, and that journalists often make conclusions that are not backed by the statements made by the scientists that are interviewed in the same articles. Our study also finds that climate sceptics are depicted as more confrontative than the advocates of human made climate change.