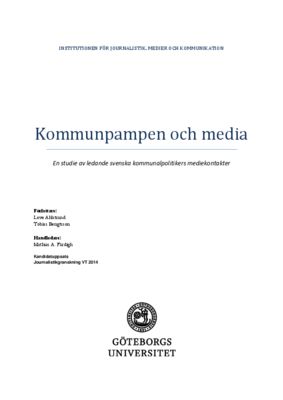 The purpose of this study is to examine the mediatization of Swedish politics on a municipal level. We live in a world were media affects many aspects of life. One of those aspects is the communication between the citizens and the politicians. Our main research questions are: To what extent do politicians communicate with journalists and who initiates these contacts? Do politicians talk to some types of media rather than others? What factors make a politician choose to speak to media? To what extent do leading Swedish municipal politicians use media strategies? To answer these questions we have used various theories to help us understand media’s role of today. First we explain the transformation that has taken part in Swedish media over the last century, from political party press to independent media companies. Then we explain the theories about the mediatization of the politics and the difference between media logic and political logic. Lastly we also go through media’s role in a democratic society. To answer our research questions we constructed an online survey which we sent to all chairmen and vice chairmen of the municipal boards in Sweden, a total of 786 politicians. 525, 68 percent, chose to take the survey. Our study shows that a vast majority of leading Swedish municipal politicians talk to journalists at least once a week. A majority of the politicians also experience that the coverage of their politics differ between different media sources and many also find it hard to reach out to the citizens with their politics through media. Nearly half of the respondents work with media strategies. The study confirms previous studies that the politics are mediatization and that the media affects the politicians’ work to a considerable extent.