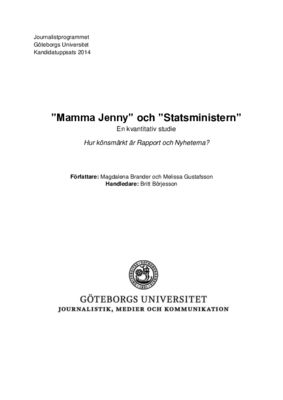 In this study we have chosen to explore if there is still signs of gender typing in the two news programmes Rapport and Nyheterna. By using a quantitative survey as a method we have investigated if there are any differences between the sexes and their roles. The two main questions where: How does the representation look when it comes to the numbers of women and men? In what extension is the representation gender typed? Due to different theoretical points and former research we have seen that journalistic subject and gender often tends to go hand in hand. When it comes to other participants, such as subjects of interviews, earlier research has shown that experts most often are men. Whereas women often participate as ordinary people, such as mothers or students. Our theoretical point of views is the existing gender system, both in the society and media sphere. We also take departure in the media system and the fact that what we are fed with from the media also is the way we create our conception of the world. In our results we found that that there is a small difference in how many women and men that appears as reporters in these two news programmes. When it comes to interviewed people there is a slightly larger difference. In both cases men have the upper hand. When observing the results regarding gender and journalistic subjects we see that there are still differences in what journalists cover depending on gender. Also when it comes to subjects of interviews, they also tend to depend on gender. After all we can see that the gender system still remains. If not convincingly enough in the over all numbers of women and men participating, we see it in the field in which they appear. Therefore gender typing still appears to be a problem that has not yet been solved.