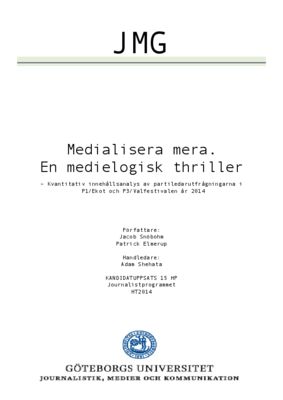 This study aims to map out the degree of mediatization present in the communication between Swedish public service journalists and politicians in the 2014 election campaign. In doing so we chose to look at the presence of media logic in their communication with each other. Specifically, we have used the pre-election interviews with the party leaders from Sweden’s two biggest parties. Furthermore, we have chosen to focus on Sveriges Radio, the Swedish public service radio company. Sveriges Radio concists of four different radio channels, of which we have chosen to focus on the channels P1 and P3, the first having a somewhat more ”serious” profile, focused on producing quality news and other journalistic products, while P3 is leaning towards a younger audience and describes its own work as ”soft, humorous and important radio”, mixed with music and other forms of entertainment. Both channels produced interviews with the party leaders, which then became our objects of study. The study is based on a quantitive content analysis method. Based on earlier academic studies and theory, we chosen a certain numbers of possible indicators of media logic, hoping to make visible the degree of mediatization, and the difference between the two channels. One of the indicators that we chose to focus on was the accomodation between the topics of discussion within the interview and the topics prioritized in the election manifestos of the parties. In doing so, we of course had to study the manifestos as well, which resulted in a separate quantitive content analysis, which we later compared to that of the interviews. The results of the study showed that a certain presence of media logic and indicated that the party logic was less present in both radio channels. Comparing the two radio channels and their programs, our indicators showed a tendency in P3 leaning more towards media logic, than we did in P1. It shall be noted that these results could be interpreted in other ways. The interpretation made by us is thus based solely on the earlier academic studies that we have managed to find.