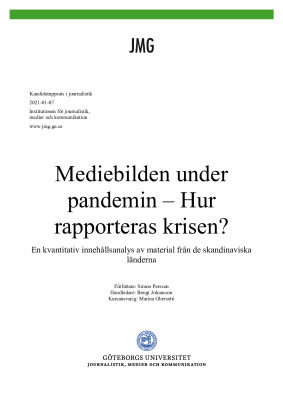 The purpose of this quantitative study is to find out how the media image of Sweden, Norway
and Denmark has been framed by the leading evening press in the other countries during the
initial three months of the COVID-19 pandemic. The study aims to answer which frames that
dominates the mediapicture, if Sweden’s, Norway’s and Denmark’s handling of the initial
three months of the COVID-19 has mainly been portrayed in a positive, negative or neutral
light and who is being interviewed in the news coverage.

The study aims to bring forward generalizable facts regarding the mediapicture of the
different countries and how the news has been framed. Therefore, a quantitative method has
been chosen since it offers good basis to systematically work through and analyze a great
amount of data and to fulfill the aim of study.

The theoretical framework in this study consists of framing, news evaluation and agenda
setting theory. These theories have contributed to fulfill the aim of the study.

Framing has been used to answer how the news coverage has been framed through different
lenses and that how the news is being framed also influences the opinions of the newsconsumer. News evaluation has been relevant for the study since it offers an understanding of why some events are deemed too have a higher news value than others. Agenda setting theory has been included in the theoretical framework partly since it is closely related to the theory of framing and also because it explains how the choices bigger news outlet make regarding which articles to publicize and how the general frame of those articles are designed also influences the choices smaller news outlets make when it comes to their daily work. It is therefore reasonable to argue the point that the journalistic choices the newspapers included in this study has made during the time interval the study analyzed also influenced the general opinion of readers not only exclusive to readers of the chosen newspapers.

The method use in this study is a quantitative contentanalysis. This method has been chosen
with the aim of answering the study’s purpose too find out if and how the media coverage of
the Scandinavian countries differentiates in different Scandinavian countries. Factors such as
the general tone in the article (e.g. positive, neutral or negative), which frames being used
and who is being interviewed and the interviewed statement has been coded in the
quantitative contentanalys that has been used.

The study also shows that officials are the most commonly interviewed occupational group in
the articles included in the study. This was most common in the articles regarding Sweden
and this result is in line with previous studies.