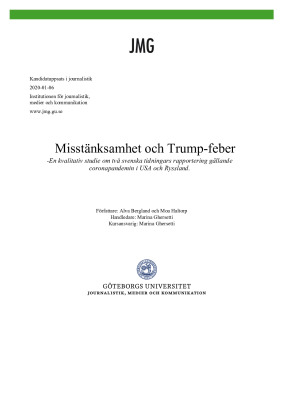 The covid-19 pandemic has affected the whole world in different ways and each country has had a unique approach towards the crisis. Russia and the United States are both powerful nations that regularly appear in the Swedish media coverage. But how does the Swedish news reflect the current situation in Russia and the United States? In this thesis we have
comparatively examined the two biggest Swedish newspapers; Aftonbladet and Dagens Nyheter of the basis of this issue.

Our purpose is to look deeper into the media coverage and to see which images are
reproduced of the two countries. We also want to see if there are any differences between the
countries and how they are presented. The question we wanted to ask ourselves whilst doing
this is “what picture is given by Trump and the US during the Corona pandemic?” And the same thing but about Putin and Russia. We also asked ourselves “Does the image produced by the media coverage indicate any differences between the countries and if so, then how?” The theories we are using to examine this are above all the Theory of Framing, media logic and journalism during crises.

The main findings in this study is that there is an existing negative picture of the news from
both countries. They are looked at in different ways, but there is still a framing done to
mediate a negative picture. Donald Trump receives a lot of criticism towards him as a person,
while Vladimir Putin is represented within a bigger picture of the whole political system of
Russia that receives criticism from its inhabitants. Trump is the main focus in the articles that
we’ve studied and Putin has a more anonymous approach. The differences can be summarized
to the focus on Donald Trump’s actions versus the abstraction of the Russian state.