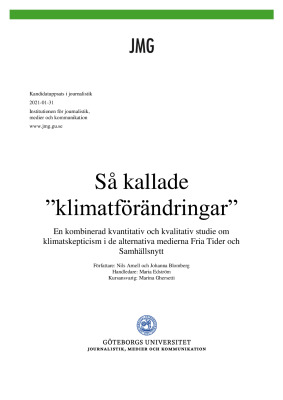 There is a growing interest and understanding of the global climate crisis and the effect that it has on
the world. Through this growing interest, there has correspondingly been an increased amount of
attention that the climate question has been given in media. The purpose of the study is to research
how the journalism of climate change is portrayed in the alternative online newspapers Fria Tider and
Samhällsnytt. Both of these news sources have a right-wing nationalistic context. Through previous
research, it is known that there is a strong correlation between right wing nationalism and denying the concept of climate change. The theoretical points that we have decided to base our analysis on are logic within media, the deign theory and the ideologically critical perspectives. By using these, we will get a better understanding of the research that we acquire.

We decided to divide the research into three parts. The first phase, the mapping phase, gave us
answers to our quantitative research question. Within this stage, we wanted to find out to what extent Fria Tider and Samhällsnytt respond and report to climate change. In the second phase, the qualitative phase, we were able to obtain articles concerning climate change. We then analysed these extensively through a critical discourse study. In the third and last phase, the deepening phase, we researched the most prominent parts to see if the same details and elements were apparent in previously published articles. From here we analysed using the same three factors: diction, favoritism and imagery.

The study shows, in the mapping phase, that climate issues are a low priority, making up around just
one percent of the total articles published on both sites under the span of a three-month period. The
selection of articles presented on the issue, followed by the critical discourse analysis, showed that the articles in fact had very little to do with actual climate change. Instead, the articles in Samhällsnytt often gave way to criticism towards renewable energy while the articles in Fria Tider focused on the actions of activists and politicians or new rules and legislations, often with a significant focus on the opposing voices.

The second phase of the research showed remarkable language details, especially with the use of
quotation marks, questioning terms about climate change and displaying an unserious view of the
people associated with the issue. People with a critical voice towards climate activists or politicians implementing climate regulations were given a lot of space in both media. Images were used in the articles to portray Greta Thunberg in an unprofessional manner. The research also showed that in most articles, critical voices towards people fighting for climate action were prioritized.

The third phase confirmed our previous research. However, just as in the second phase, images in
Samhällsnytt were used in an objective manner. Unprofessional images of Greta Thunberg were less
frequent in the third phase.

Our study concludes that both Fria Tider and Samhällsnytt are skeptical to climate change being
caused by human activity and about acknowledging the concept of a climate crisis.