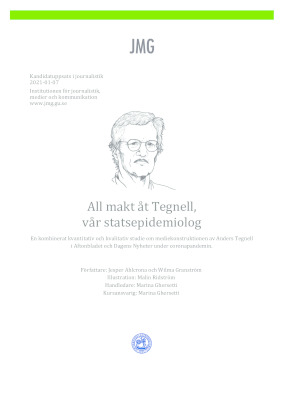 The purpose of this study is to investigate the media construction of the State Epidemiologist Anders Tegnell in Aftonbladet and Dagens Nyheter. The aim is to see if there is a pattern in how frequently he appears in the corona reporting, which roles he has been assigned and if they have changed from week 10 to week 48. Furthermore, the study aims to see if there is a difference in the media construction of Anders Tegnell between the newspapers Aftonbladet and Dagens Nyheter.

This has been achieved by performing a combined quantitative content analysis and qualitative text analysis. The first part of the study was carried out by collecting 990 articles from Mediearkivet Retriever to see how frequently he appeared over the chosen period of time. Moreover, we determined a number of criteria and through them we ended up with 99 articles which we analysed with an analysis schedule constructed by us.

With the help of a theoretical framework consisting of News as Stories, Framing, Personification, Crisis Journalism, Media Logic, State-orientated Risk Culture and the terms Role and State Epidemiologist we have been able to understand the media construction of Anders Tegnell.

The primary findings of this study were that the media construction was divided into two parts: Anders Tegnell was either assigned a role or evaluated by others. The four roles were The Teacher, The Pilot, The Defender and The Private Person. The Teacher was the most common role, but they all integrated with each other during the chosen period of time. In excess of the roles, he and his actions were evaluated by others with the help of stylistic figures such as “hero”, “father of the land” and that he should “get off his high horse”.