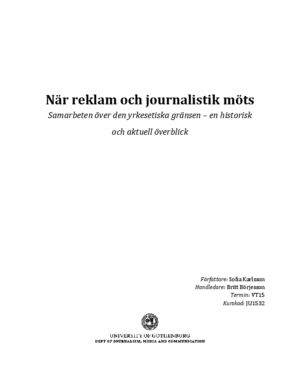 Author: Sofia Karlsson Title: When Advertising and Journalism Meet Level: Bachelor of Journalism Location: University of Gothenburg Language: Swedish This bachelor thesis consists of a historical analysis of the collaborations between advertisers and editors, which led to the increasingly common phenomenon known as “sponsored articles”, or “advertorials”. From the first known printed ad in Sweden in 1645 to the present day, journalism and advertisement are shown to have been evolving mutually. This co-dependence between the two is demonstrated and scrutinized in this study to provide a more in depth understanding of the nature of their relationship. Through the presentation of historical facts, interviews, and background research, an attempt was made to provide both a historical and a current depiction of the state of affairs between Swedish magazines and advertisements within them. Furthermore, it was of interest to investigate the opinion of the professionals involved in the creation and publishing of said advertorials. Following this logic, the study also brushes on the attempts made to minimize advertisers’ control over the freedom of media, as well as possible ethical implications to journalism itself, which derive from these sponsored articles. The development of this thesis was underpinned by three main research questions. They were: How has the collaboration between editorial and advertisement come to be? How do the collaborations between editorial and advertisement look today? How do professionals view editorial collaborations today? Data collected suggests a few points of interest. The first one being that the extinction of the agency formerly responsible for controlling sponsored ads has shifted the responsibility of overseeing text commercial boundaries to editors. Another finding is that sponsored ads are directly related to the economy, seeing as most media depends on advertising money to function. Harsher economies make the number of newsreaders plummet, which draws advertisers away. In attempts to re-attract them, newspapers and magazines have begun utilizing new strategies, such as sponsored ads. Moreover, despite studies demonstrating how nearly 60 percent of newsreaders fail to see advertorials as ads, editors insist there is a clear distinction between ads and editorial products. Additionally, editors claim that because of the fact that the advertorials are not written by the editorial staff itself, they are not overstepping journalistic ethical boundaries.