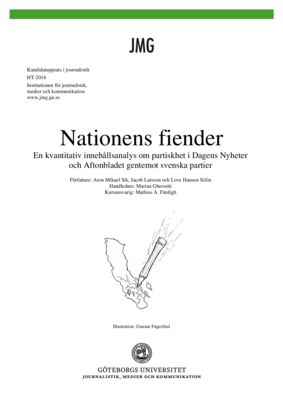 This study aims to show to what degree that two of largest newspapers in Sweden, Dagens Nyheter and Aftonbladet, might be biased towards any of the Swedish political parties. We also want to see if Dagens Nyheter and Aftonbladet differ in their coverage of Swedish politics. These two newspapers are chosen due to their history as a morning paper (Dagens Nyheter) and a tabloid (Aftonbladet). They also come from different political traditions and still to this day Dagens Nyheter call themselves independent liberal in editorials. Liberal in a Swedish context means center/right on the political left/right spectrum, while Aftonbladet calling themselves independent social democrats.
We want to see if there are any differences with regard to what kind of news/issues they report on, to what degree they report, and how they treat the political parties in parliament. The purpose of this study is to add further research to the election studies done by Kent Asp since 1979 and Bengt Johansson who overtook the task in last election (2014). In doing so we adopted their method and therefore have done a quantitative content analysis.
We have read the paper edition of both Dagens Nyheter and Aftonbladet every fourth day starting on July 1st all through November 9th of 2016. By doing so we have covered a larger period of time and thereby eliminating part of the risk of getting stuck in a particular scandal or other kind of affair, which would be misleading data wise. We have analyzed over 300 articles and more than 500 actors on the Swedish political scene.
What we found is that Dagens Nyheter are staying true to their role as a “morning paper” in that they are more focused on “harder” news and also have more political articles during the period we studied. By the same token, Aftonbladet are still functioning as a tabloid newspaper and have a political commentary that is more openly taking sides. Aftonbladet also have a larger degree of superficial, sensationalistic news articles than Dagens Nyheter.
Studying how the political parties are portrayed in the two largest daily newspapers in Sweden, we have found that virtually all parties are getting a fairly neutral coverage. A few exceptions aside, there are more neutral than positive or negative articles written about the parties. One of these exceptions is Feministiskt initiativ, which doesn’t have any representation in parliament. Out of the three articles about them, one of them was positive and two were neutral.
Moreover, there is also a strong tradition of scrutinizing public officials in Sweden, which we think is transparent in the material that we have worked with in this little study of ours.