Examining the use of alternative media- and mainstream media. 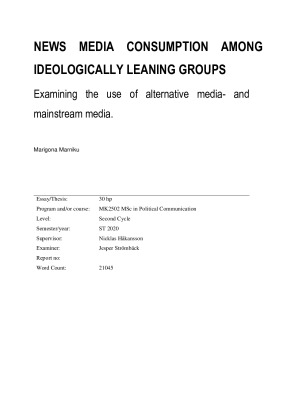 This thesis takes its point of departure in the investigation of news consumption among ideologically leaning groups. The high choice media environment has led to people turning to multiple media choices and numerous alternative media outlets. Ideologically leaning people who are politically interested turn to alternative media outlets to confirm and deepen their political beliefs and opinions. The consumption of alternative news has been discussed from different perspectives and is often examined from critical angles. The research field lacks a more holistic approach to reviewing ideologically leaning group’s consumption of their news diet as a whole and in a combination of different types of news media content. The conventional groups that have been of interest in the research field have always been left-wing and right-wing people. Apart from these two groups, this thesis attempts to incorporate people with liberal beliefs as alternative media consumers.
Furthermore, this thesis focuses on how and why ideologically leaning people consume mainstream media news separately- and in combination with alternative media sources. This thesis’s theoretical framework consists of three main concepts: the public sphere theory, the conceptualization of trust, and the uses and gratifications theory. These theories underpin the thematical analysis of the empirical result. The chosen method of this thesis is qualitative focus groups. There are three focus groups; one left-wing, one liberal, and one right-wing group (N=9). The results show that the ideologically leaning groups consume mainstream media outlets as a base of news. All the participants showed some distrust towards some specific mainstream media outlets, which is the evening papers. The outlet Aftonbladet was given as an example by all of the participants. However, they still continuously consume the outlet, even though they showed distrust towards it. The groups have different approaches to managing the distrust; the liberal group explained that they carefully double-checked the information by going back to the articles’ primary source of information. The alternative media sources are used as a complement to their daily media diet to read more credible news. For instance, the right-wing group wanted information about criminals’ ethnic background, pictures, and names to build on their already existing world view where different types of immigrants commit different types of crimes found in the right-wing alternative media outlets. Finally, the liberal group showed great distrust and hostile media perceptions when encountered with content, unlike their own opinions and beliefs. This shows the importance of investigating this group in studies regarding media trust and alternative media even further.