Investigating the mechanisms of political theatre 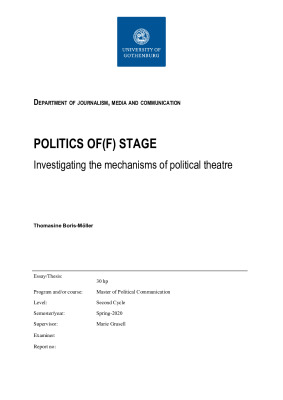 This thesis takes its point of departure in the argument that theatre as a medium has largely been overlooked by the field of political communication. The focus of this study is therefore to place attention on theatre from a political communication perspective.
Theatre is here looked at both as a medium with political potential, and as a medium subject to
political decision making. One the one hand there is a need to investigate theatres’ role as communicators of political content, as this seems to have been largely overlooked by other fields than that of theatre and drama studies. On the other hand, as theatre (as well as culture generally) is shaped by its politico-cultural conditions, contemporary theatres’ relationships to cultural and financial policy need to be investigated to understand the context in which their messages are shaped.
This study aims at investigating whether and how political theatre is used in Sweden and whether and
how the field is influenced by the politico-cultural context of funding and cultural policy. This is
looked at through the perspectives of 1) how creative-executive teams at prominent Swedish theatre institutions view (their own and others’) use of political content within the theatre field and 2) how theatre institutions’ work is affected by Swedish cultural policies and funding authorities.
The thesis consists of a qualitative case study of five prominent theatre organizations in Sweden, using interviews with eight of their creative-executive decision-makers. The interviews are contrasted to theory from the fields of political communication, theatre studies, cultural policy and public governance of the arts.
The results show examples of how contemporary Swedish theatres use theatre for political purposes,
of current political themes on Swedish theatre stages and of how financial and political conditions
influence the field. This paints an emergent picture of the mechanisms behind political theatre in
Sweden. The conclusion is that theatre is a medium used for a diversity of political purposes, but with
an openness that makes it uncomparable to more direct political media. It is first and foremost an art form, that can be seen as a political medium when it is used to communicate political ideas or used for political practices, as for example a democratic arena or discursive space. It is also a politically governed medium, which makes it sensitive to influence from political decision-makers, with the arm’s length principle needing to be continuously enforced to keep the art free from political tampering. As this study is based on a small sample, large generalizations can not be made. However, the combination of experiences of informed professionals from the field with current policy and
interdisciplinary theory, offers an emergent picture of a medium and its supporting mechanisms that
can be added as a research topic to the field of political communication.