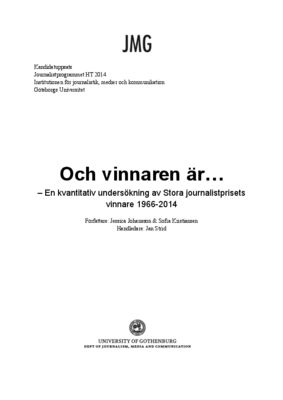 Authors: Jessica Johansson & Sofia Kristiansen Title: And the winner is… Level: Bachelor of Journalism Location: University of Gothenburg Language: Swedish Number of pages: (34) In this study the winners of Sweden’s most prestigious journalism award Stora journalistpriset are characterized in the search for the dominant award winner. To find the dominant award winner we used a quantitative method, where we gathered information about the previous winners between the years of 1966-2014. Gender, age at the time of the award, whether they won individually or in groups, their employer at the time of the award, subject of the winning material and where it was first published, were the variables. A total of 268 award winners were characterized from these variables and a statistic analysis were made. The statistic analysis showed that there has been a dominant group among the award winners. Between the years of 1966-2014 the typical award winner was a man between 31-40 years old, who worked individually for public service. The winning material was mainly published in the printed press. The award was handed out mainly for ones journalistic attributes. Although in the more recent years the dominant group is losing ground. It is now insignificant what gender the journalists have, if they work individually or in a group and in what form their material is published. Their age however is unchanged, it is still the journalists in the ages of 31-40 who exceedingly wins the awards. The subject of the winning material differs whether you are male or female. Females tend to be awarded for subjects coded as gender-neutral, such as their journalistic attributes, environment, internet-related, creation/restruction of media and other. Males however went from being awarded for gender-neutral subjects to being awarded for traditionally male subjects, such as politics, crime, war, catastrophe and accidents, economics, sports, science, technology and work. The employer matters for the journalists working in broadcasting media and in printed press. For a higher chance of winning the journalists working in broadcasting media should be employed by public service. For the journalists in printed press it is highly likely to win if they are employed by Bonnier.