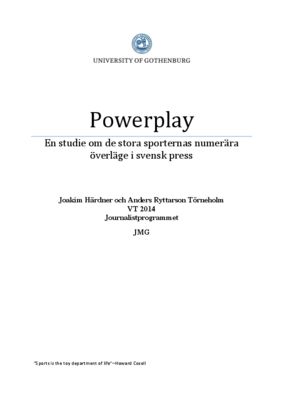 The purpose with our study was to see if and how the amount of articles regarding different sports has changed during the last three decades. If it had changed our target was to se how and why it had changed. We have performed a quantitative content analysis. In the analysis we have studied the two national Swedish newspapers Dagens Nyheter and Aftonbladet. In doing so we have created two synthetic weeks in each of the years 1986, 1999 and 2012. In total we coded almost 2000 articles. In our analysis we used the theories about the commercialization of journalism. Our thesis where that an eventual change could have to do with the commercialization of sports journalism, something that has escalated during the last decades. What we found in our study was that two sports dominate Swedish press, football and ice hockey. That was the case in all of the three years in our study. The difference though is that the two sports share was considerably larger in the latter years of our study, with an exception of football in Aftonbladet where we could see a slight decline from 1999 to 2012. That was anyway compensated by the fact that the number of large articles was greater in 2012. Our conclusions was that we could see a change in the share of different sports in the Swedish press but that the change mainly is that the large sports have received even more attention in the press. We cannot be completely sure that the change is an effect of the commercialization of journalism. What we can say though, is that it probably is an effect of the commercialization with support of statistics regarding television ratings and live attendance.