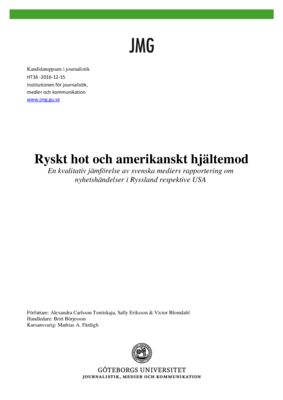 In recent years people in Sweden have been more worried about the current situation in Russia. There are reasons to believe that this may reflect on Swedish media and their coverage of the Russian Federation. Another country that is influential and has a big impact on Sweden is the United States. This raises the question if the nation a journalist is covering is affecting their ideals. This is why this bachelor thesis is investigating and comparing in what way two Swedish newspapers are covering news about Russia and the United States.
The purpose of the thesis is to investigate if Swedish journalists are maintaining their ideals about objectivity and source criticism when covering news stories that are either happening in or is affected by Russia or the United States. The hypothesis is that Swedish journalists are less objective when reporting about Russia than they are when reporting about the United States and that the source criticism is affected in different ways when the journalists are reporting about the different countries. The questions at hand is how different sources are treated, if there are any noticeable loaded words in the texts, who is represented in each article, what kind of angle the journalists are working from and what kind of news are covered from the different countries. The thesis is taking the Framing theory, the theory about news valuation and media logic into consideration.
The method used is a qualitative comparative text analysis of articles about Russia and the United States published during a week in September 2016 in the Swedish newspapers Dagens Nyheter and Aftonbladet. To note here is that the year of 2016 is an election year in both the Russian Federation and in the United States with the Russian election in late September and the US election in early November. The analysis was carried out using a mass media rhetoric analysis model.
The main findings in this study is that the type of news from the United States is more varied than the news from Russia in both of the Swedish newspapers. Uses of American sources are plenty and Swedish journalists seem to trust in American media a lot as the coverage is mostly copied from American media sources. The case is very different concerning Russia. Swedish media seem to cover Russia mainly with an political angle. Also military news stories that concern Russia is abundant. Swedish journalists also seem to have a lower standard of objectivity and source criticism concerning news about Russia. The stories about Russia are in general more hostile written than the stories about the United States.
Keywords: Russia, United States, Objectivity, Source Criticism, Aftonbladet, Dagens Nyheter