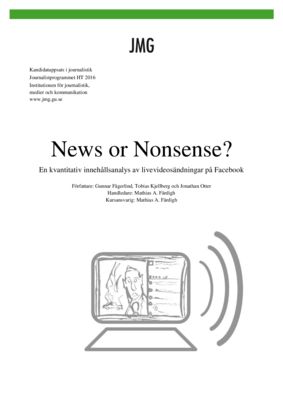 Title:
News or Nonsense? – en kvantitativ innehållsanalys av livevideosändningar på Facebook
Authors:
Gunnar Fägerlind, Jonathan Otter och Tobias Kjellberg
Subject:
Undergraduate research paper in journalism studies, Dept. of journalism, media and communication, (JMG) Gothenburg university
Term:
Fall 2016
Supervisor:
Mathias A. Färdigh
Purpose:
In recent years, the phenomenon of livestreamed news-video has gone through immense inflation on social medias – and the phenomenon continues to increase still. In Sweden, news companies are swiftly and gradually picking up on the trend, perhaps led by their American and British counterparts. But, as research has shown, live reporting is not journalistically problem-free. One example (of several) is that live reporting puts a greater amount of pressure on reporters to deliver succinct and cohesive information – all in one take – in comparison to regular video reporting. Furthermore (as we ourselves argue) the ability to maintain a reliable journalistic-ethical approach is heavily compromised during live reporting.
Considering the problems of live video reporting we strove to examine the content streamed as such by Swedish news companies on Facebook, and to what extent the collective material could be defined as news. We also asked ourselves to what extent the live-function was truly necessary, and what general strokes could be found. With the support of earlier research we also discussed what could explain our results and what possible forces that could be pushing the inflation of livestreamed videos on social media.
Method:
Quantitative content analysis based in theories of newsworthiness and journalistic ethics. To exemplify the phenomenon of live-streamed videos on social media as a whole we chose Facebook as our platform.
Procedure:
We analyzed all livestreamed video from all Swedish newspapers on Facebook that were aired between April 1st 2016 and October 29th 2016. We argued for, and operationalized a set of news-criteria of choice and coded the material. We discussed the results with support of previous studies.
Results:
Some videos met the news criteria to a very high degree while some met none. Out of 10 possible news criteria, none struck the full pot. The highest amount of news criteria we found in a single video was 8. On average, the videos fulfilled 3,2 news criteria. Although that is a seemingly low figure, it is higher than we initially presumed. Considering these results though, it is reasonable to assume that journalistic prowess is not the main ambition of these live-videos. One explanation we found support for, was the theory that news companies use social media to increase traffic to their main website. We also discussed what other reasons could explain the results, with support in earlier studies and theories. Amongst these the possible pressure that lies upon news companies to show their audience that they keep updated with the latest technology and trends.
To our surprise we found that one fourth of all live-videos were shot when and where the referred happening actually took place, justifying the use of the actual live-function. In most cases though, the necessity of the live-function could be put into doubt.
Although these results may seem dire, they don’t necessarily need to be seen on as an implication of journalistic decadence. Seen from another perspective, these live-videos seem to be a complement to news companies’ main product – which in this case is old-fashioned newspapers. If the live-videos does not negatively affect their main product it could be argued that the part of the live-videos that actually contains news, although it may be small, contributes to an overall greater journalistic coverage.
Key words:
Live reporting, social media, facebook, nyhetsvärdering, journalistisk etik, livevideosändning